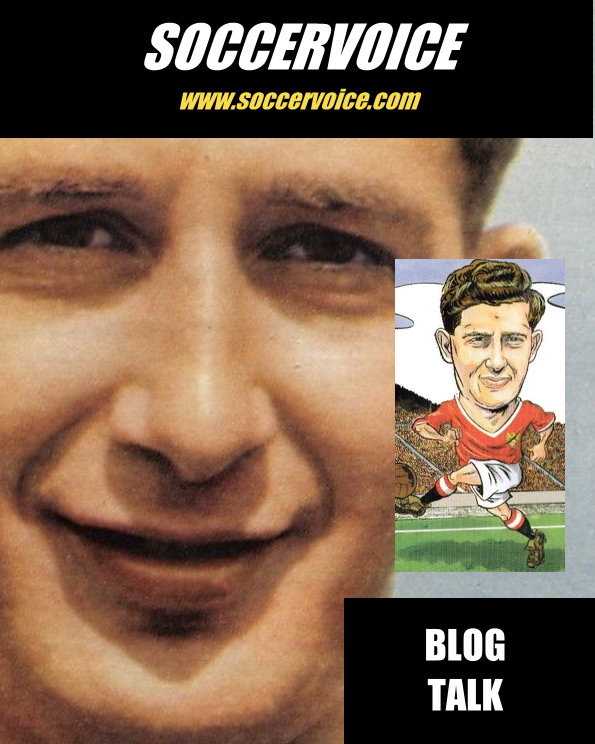 Fred Goodwin is a name that would fit the list of those seen as good professional footballers also getting into the management trade later on, but looking at his paths and what he did, would really describe him as the Allan Karlsson of football.

Fred Goodwin died at the age 82, back in 2016, and didn’t reach the age of 100, but he was always around when historical events appeared in football. As you can see on Football Addict, this story will tell you. Few will probably not attach him to any of it, but you could always be surprised and not knowing the were abouts of “Fred The Red”.

Fred The Red is something we just found as a nickname that suited, without really believing that the Man Utd mascot was once named after him, but it might have been, don’t know.

Fred Goodwin started his career at Manchester United, being discovered by the legend himself Sir Matt Busby, and was really a very important player after the Munich disaster rebuild of the team.

Goodwin was never selected for the tour to Belgrade, and was at home when the accident happened in Munich, and might have got the unpleasant job to replace those legends that died, with Fred given a steady first team role in the team.

This was our first example of a real historical event that Fred Goodwin were part of, but in real never was involved, despite being one that got a very important part, due to that tragic happening.

Sir Matt Busby decided that the services of Fred was no longer needed as he made a £10.000 transfer to Leeds United, and by that become a team mate of Jack Charlton and Billy Bremner, and starting a route of football heroics being managed by no other than Don Revie.

Everyone has heard of another signing done by Leeds United from Manchester United in those early days, the one of Johnny Giles, but Fred did the same move a few years earlier. His life at Leeds United could have gone on far into those great years in the 60’s, but a bad injury sustained in 1964, in a tackle with no other than former Leeds United legend John Charles, made his career cut short a bit too early. Goodwin played 107 league games at Leeds and was a steady performer under Don Revie’s first years in charge.

But as footballers getting injury problems, some of them turns to management at a very early age, as we have seen before, Brian Clough, being another doing so and getting an early start to a career as the man in charge.

Fred Goodwin got his frist tast of management with Scunthorpe United, being handed the job in a player capacity, but during his time in charge only appeared in 6 league games and from there retiring entirely as just concentrating on the management side of football. Goodwin left Scunthorpe in 1967, and his next job in football were as a manager of the NASL club, New York Generals.

From Sir Matt Busby to Don Revie, Goodwin was in place for a new adventure that would see him connect with players that later would become legends themselves. New York Generals played in the NASL but never to be seen after they were dissolved in 1968, with Goodwin being their manager at the time.

New York Generals only played one single season in the NASL, with Goodwin at the helm. Certain players in the Generals team was to take notice of. Luis Menotti was a forward signed by Goodwin from Boca Juniors. We all know what happened 10 years later, Menotti leading Argentina to winning the World Cup and later being in charge of Barcelona.

Another player to see in this New York Generals “roster” is Gordon Bradley, the first coach of New York Cosmos and later taking charge of Washington Diplomates. Bradley is seen as one of the real legends of the NASL, coaching the likes of Pelè, Franz Beckenbauer and Johan Cruyff, the only one to have done that.

The connection between Bradley and Menotti, who later played alongside Pele at Santos, has been seen as a vital part of getting the Brazilian to join New York Cosmos, instead of landing a lucrative deal in Europe, which was clearly a chance. Fred Goodwin did bring the two together, Bradley and Menotti, as they both appeared under Goodwin at New York Generals.

When Fred Goodwin took over New York Generals he brought with him several of his former players at Scunthorpe and also teammates from his days at Leeds United. A number of them bacame legendary NASL players, and as Bradley moved to become part of the phenomena New York Cosmos.

Players such as Barrie Wright (x Leeds United), Michael Ash (x Scunthorpe), Barry Mahy (x Scunthorpe) and Geoff Sidebottom (x Scunthorpe), all were drafted by Goodwin, and this was not much known, with the NASL being a place to “invest” long before Pelè.

Barry Mahy and Gordon Bradley both became legends at New York Cosmos, being part of that adventure from early on. While Mahy and Bradley stayed in the US and moved to new clubs, Fred Goodwin decided to jump at a chance to become the new Brighton & Hove Albion manager, and he took charge of The Seagulls just after and stayed until 1970, when he moved on to his next chapter in football, Birmingham City.

Fred Goodwin made the most out of his time at Birmingham City getting the team promoted to the top flight again. He was also the manager that made football history when selling Bob Latchford to Everton for a new English transfer fee record, £350.000, but with an exchange of Howard Kendall and Archie Styles as part of the deal, it was not the full amount paid out.

Goodwin is seen as one of the best managers in the Birmingham City history, and by many described as a bit of revolutionary, introducing Yoga and a more philosophical approach in football.

The team of 1972 is seen as the best ever in the history of the club, fielding some great players and especially that trio up front, Trevor Francis, Bob Latchford and Bob Hatton were tearing apart football defenses around England. In 1975 Goodwin also made a bit of a momentum with the club reaching the semi-finals of the FA Cup. defeated 1-0 by Fulham, and seen as the last big heroic act, as it was a bit of decline in the league, ending 17th. Goodwin left his position as Blues manager in September 1975.

By the time the NASL had grown and popluarity had rised with the introduction of Pelè and his former “pupil” Gordon Bradley a rising star in “soccer” management, Goodwin returned to take charge of Minnesota Kicks.

“Kicks” and Goodwin became a good act and during his seven years tenure he did a number of historical acts. The team were relocated from Denver and Goodwin was the first ever manager of the club, who could get crowds up to 40,000.

Goodwin build an exciting team based on a good group of English players but also managed to sign South African, Ace Ntsoelengoe, the best player the World had never seen, with their national team not existing due the Apartheid regime and the country being sanctioned by FIFA, but players could go out and play as Ace did, playing with Minnesota Kicks, combining that with his career at Kaiser Chiefs in South Africa.

Despite being a memorable adventure, “Kicks” folded in 1981, not being able to continue do to financial difficulties. This was the last of Fred Goodwin as well, in the capacity of being a football manager, as he developed his travel agency and concentrated on that.

The Swede with 115 caps to his name, Bjørn Nordquist, were also among those players that Goodwin managed at Kicks, being at the club for two years and shining late into his 30’s. Another steady performer was Tony Want, a player Goodwin signed for Birmingham City and served Goodwin for almost 10 years of his career.

Ron Futcher was one of many English players and previously seen in England for clubs such as Luton, Man City and Oldham, and later moving around in the lower leagues, became one of the big stars, scoring goals for fun, and given confidence by Fred Goodwin over many seasons, playing regularly in all those years of “Kicks”, completing 73 goals in 129 NASL appearances.

The team never became champions, but managed most of the years to get through to the play-off’s or if you like, final stages, losing out in semi’s or quarter’s of the Soccer Bowl.

Alan Willey a former Middlesbrough fringe man also made the most of his football in the NASL scoring regularly as a forward at “Kicks” and one of them that stayed on and played for Fort Lauderdale Strikers, who moved their team to Minnesota, shortly after “Kicks” defunct.

To sum it all up, Fred Goodwin had a part, minor at most, in some of the great events of football, from leading players later winning The World Cup, and the Munich disaster changing his career, being the one introducing Trevor Francis to the stage of the game, breaking the English transfer record, deciding to sell Bob Latchford, and later again moving over the pond introducing South African stars to the NASL, being seen as a innovative man during his days in football.

As Allan Karlsson, no one really knew much about his existence and how he took part in some of the most memorable moments in history, with Goodwin it was real, with Karlsson it was fiction.