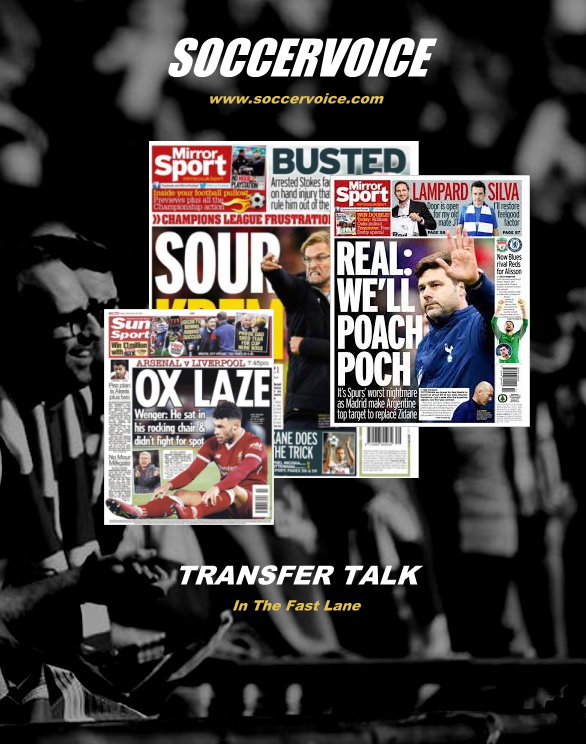 David Silva is set to leave Manchester City in the summer and David Beckham’s new MLS club Inter Miami will be in the chase, but most rumours are saying Silva will join New York City who is part of the Etihad dynasty.

Pierre-Emerik Aubameyang could be in the picture of a number of clubs, including Manchester United, Real Madrid and Manchester City all being mentioned if the goalscorer is bored at The Emirates and now being able to compete at the highest level.

Ole Gunnar Solskjaer has not yet set a foot wrong in his recruitment of new players at Manchester United, and the next step could be to bring in Aston Villa’s Jack Grealish and Birmingham City young wonder Jude Bellingham. A joint fee of £100 million will probably be what it takes to get those two to Old Trafford.

Jesse Lingard could be the next “big name” to leave Old Trafford as he looks totally out of the picture with the recent arrival of Bruno Fernandez. Would be many clubs in the Premier League that would consider a player of his caliber. Despite coming under a lot of criticism he is a former England international who still has something to prove But Jesse Lingard might consider China or MLS for his next step.

Willian is uncertain about his future at Chelsea, with reports suggesting he would leave Stamford Bridge, despite putting on a number of good performances lately. He is a player that would fit the bill for a number of clubs, but it’s still a riddle were he will end up next season.

Newcastle are said to be in the leading position to sign Middlesbrough youngster Hayden Coulson. Coulson (21) has represented England on a number of youth levels and starting to get established in a struggling Boro team, but they certainly hope to keep him, but again with relegation threatening and money on the table, a move could be on.

Bournemouth bound Asmir Begovic is currently on loan at AC Milan, and could be considering a possible move to Inter next season. The Bosnian has over the last few seasons seen himself down the pecking order at clubs such as Chelsea and Bournemouth.

Rob Dickie is a name to look out for and currently scouts from Southampton and Leeds United have reported positively about the Oxford United defender. A fight for promotion is on at The Kassam with Dickie (24) a key in that push.

Layvin Kurzawa is a player that next season could play in Premier League with Arsenal ready to trigger PSG with a bid.

Timo Werner looks certain to end up in England next season. The Red Bull Lepizig forward is wanted by Man Utd, Man City and Liverpool. 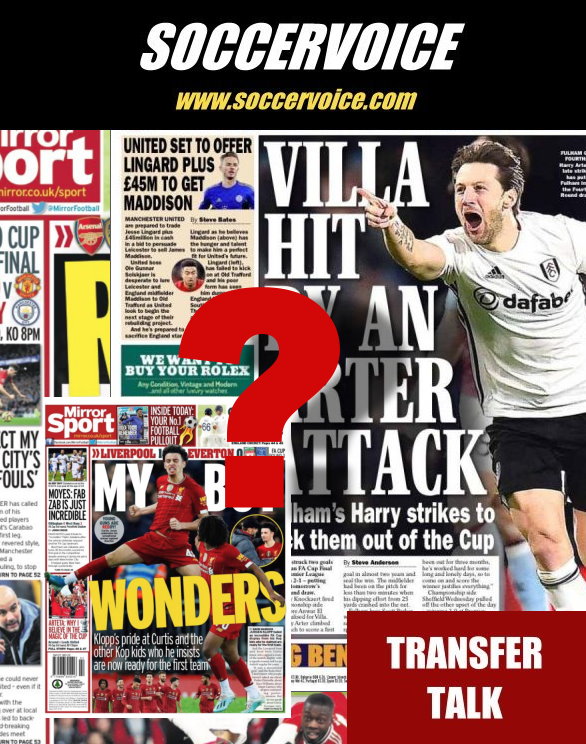 Danny Drinkwater is on the move again, this time Aston Villa will be his destination as the former England international again agress to a loan move away from Chelsea. Don’t miss a single transfer, so far, check our solid update.

Christian Eriksen is a player in demand and with the recent appointment of Carlo Ancelotti at Everton, don’t be surprised if they will join the chase, with Sigurdsson as part of a deal going the opposite way.

Odsonne Edouard could be a target for Leicester City with a £30million move considered, but few would believe this would be a move that Neil Lennon will let go through in January. The goalscorer looks as an ideal player to bring to Premier League action, but it could be that the move is a bit too soon for the former Paris starlet.

Leicester are also linked with Liverpool flank midfielder Harry Wilson, currently on loan at Bournemouth, but how Brendan Rodgers should be able to pull off such a move is difficult to understand with Wilson being loaned to The Cherries for the rest of this season. Wilson is a player that has been linked with Leicester City for a long period of time.

Ademola Lookman looks close to a loan move to Newcastle. The highly rated flank midfielder has not yet managed to tie down a regular first team sport neither at his former club Everton and currently with Bundesliga outfit RB Leipzig.

Jack Rodwell is back in Premier League with Sheffield United. The England international who previously played for Everton, Man City and Sunderland has been out of action since leaving Blackburn in the summer. He played for Blades in the recent FA Cup game v. Fylde.

Pepe Reyna could be heading back to Premier League with the former Liverpool goalkeeper considered as a possible option at Aston Villa. Joe Hart is also among the names linked with a possible move to Villa Park.

Tahith Chong is a sought after talent with Juventus trying to lure the player away from Old Trafford with a stunning offer on the table. Time will tell if the player will trigger this move and actually say goodbye to Manchester United.

Newcastle are favorites to land Chelsea forward Olivier Giroud. The French international looks eager to get his career back on track as he has lost patient at Stamford Bridge and not eager to sit and wait for his turn to get into the first team.

Conor Gallagher could be on the way in at Norwich City with his Charlton Athletic loan move cut short. Don’t be surprised if Fulham or Brentford also are in the loop to try to get the highly talented Chelsea youngster.

Erling Braut Haaland knows how to progress from one level to the next and a move to Borussia Dortmund will of course be one really easy to understand. A life on the bench or part of a heavy rotation policy at a bigger club could have stopped him evolving and Dortmund looks a solid choice.

Christian Eriksen shows his importance when called on, and the fact that Jose Mourinho needs his little Dane could see him at Tottenham also over this transfer window, being allowed to leave in the summer for free. A place in the Champions League would probably be more important for this club than to cash in a “minor” fee on Eriksen in January.

David Moyes is said to be on his way back to West Ham who just “minutes” after the defeat v. Leicester sacked their current man Manuel Pellegrini. Moyes had an interim period at the club previously and saved “Hammers” from relegation. A similar scenario looks on the table as this season has started like a nightmare.

Sheffield United are buzzing this season and recent rumor seeing The Blades chasing QPR starlet Eberechi Eze and being able to meet the asking price, makes it difficult to rule out Chris Wilder’s men in a chase for Europe.

Brighton and Graham Potter are likely to try to bring in Fyodor Chalov from CSKA Moscow and Tottenham defender Kyle Walker Peters. Both are young and very promising with the Russian international an exciting one, 21 years of age making his full international debut this year.

A new West Ham manager will be in chase for a first team goalkeeper with Cardiff City’s Neil Etheridge and former “Hammer” Darren Randolph topping the list of possible targets.

Victor Osimhen is a new name linked with Liverpool. The Nigerian international currently at Lille in France, is a  forward that knows how to score goals, 10 in 18 league appearances until know for his club team, scored 4 in 9 full internationals for Nigeria.

Arsenal looks certain to part company with Granit Xhaka. The Swizz midfielder is not a popular man among fans just to get this scenario out of the picture, it would be better to let Xhaka leave than to have a hostile atmosphere at The Emirates. Talks are understood to be advanced with Hertha Berlin.

Adrien Rabiot is a name linked with Arsenal. The former Paris midfielder joined Juventus this year but so far he hasn’t really settled in. The 24 year old needs regular first team football week in and week out and it could be easier to get that at Arsenal than at Juventus at the moment.

New salary regulations in Chinese football could see a number of starts leaving and speculations are already circulating about Marouane Fellaini return to English football. His former club Everton, West Ham and Newcastle are clubs that could be in the chase for the Belgian international.

Oscar could be close to a return to European football, so could Marko Arnautovic, of course a number of clubs would be running down the doors to get the players to sign, yet to see any specific club linked, but not be surprised if Arsenal and maybe Tottenham will join the list of interests, Everton could also be in for a new “star” probably.

Burnley and Brighton are chasing Hamilton defender Jamie Hamilton. The 17 year old is one of the most talented youngsters to have come out of Scottish football and he has already played in the Scottish U.19 team.

Fiorentina could be willing to let Rachid Ghezzal return to Leicester in January and with that happening loaned straight out again to Serie A rival Atalanta. Ghezzal, previously with Lyon and Monaco, has seen his chances limited at Leicester and Fiorentia.

Everton could be in the chase for Lorenzo Insigne as Carlo Ancelotti is eager to make the right moves to get The Toffees into European contention. Insigne (28) would be an ideal signing but it looks more like a wish than a dream to come through.

Dayot Upamecano from RB Leipzig is a player in demand. The 21 year old could be on the list of possible targets for Arsenal as Mikel Arteta are eager to bolster his squad and get The Gunners on track.